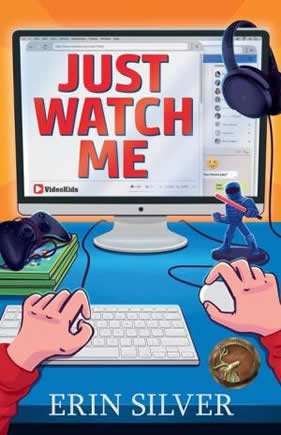 Themes: the power and perils of social media • strong themes of friendship, family, and bullying • a relatable male protagonist who loves video games makes this book appealing for boys

Twelve-year-old Simon Rosen has qualified for the Canadian Video Game Championships in Vancouver. If he can get straight As in school, his parents have agreed to take him. The stakes are especially high. His parents are always fighting, and if he can just get them to Vancouver—the place where they fell in love—maybe he can save his family from the brink of divorce. Straight A’s aren’t usually a problem for Simon, but this semester he’s enrolled in Technology and the class isn’t what he expected. Instead of building robots or flying drones, it’s a social media course! To get an A, he needs to create “engaging content” on his own live-streaming VideoKids channel. Simon hates being the centre of attention, and no matter how hard he tries to record good live-streaming videos, something always goes wrong! From accidentally recording his mom’s underwear and giving his dog mouth-to-mouth to having diarrhea live online, Simon can’t do anything right. Life is extra complicated because Simon has a secret crush on his best friend Jocelyn—an MMA champion originally from the Philippines. She also desperately needs an A in Tech class if her parents are going to let her continue her MMA training. The two friends find themselves in direct competition when their Tech teacher announces that only one student will receive an A. Add to the mix the Mendelson twins—two bullies who are out to get Simon—and Simon is in for the toughest semester of his life.

Watch the Trailer for Just Watch Me

Reviews for Just Watch Me